Home » Flowers » The Last Mum of the Season 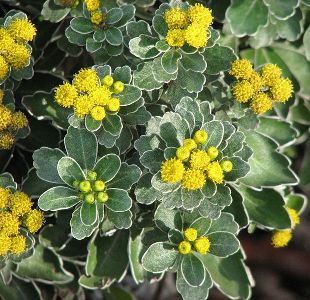 Chrysanthemum pacificum is such an unassuming little plant that you might fail to notice it at all for much of the gardening season. It has little in common with other garden mums, which tend to be tall, colorful, and floriferous. Instead, C. pacificum measures in at a compact eight to twelve inches tall. It has tiny, button-like blooms that somewhat resemble ageratums in form, though they’re bright gold in color. And it’s not going to stop traffic, that’s for sure. In general, I would say that C. pacificum has two big things going for it: gorgeous foliage and late-season bloom. I think C. pacificum has a certain appeal to gardeners who make a game out of extending the season of bloom for as long as possible. So it’s not a showy plant – who cares? As long as there are flowers in your yard, you feel like you’re winning the game. In fact, C. pacificum blooms so late in the season that at the northern end of its range, or in very frosty autumns, it might never make it into bloom. (Or so I’ve heard – it’s a reliable bloomer in Georgia, where I live.)

Fortunately, C. pacificum (which taxonomists have recently reclassified as Ajania pacifica, though the name hasn’t caught on yet) has really great, evergreen foliage. The leaves are grayish-green, with a silvery-white margin around the lobed edges. Visually, the plants have the texture and weight of pachysandra (though they’re not as shade tolerant). Since it spreads by underground rhizomes, it ca 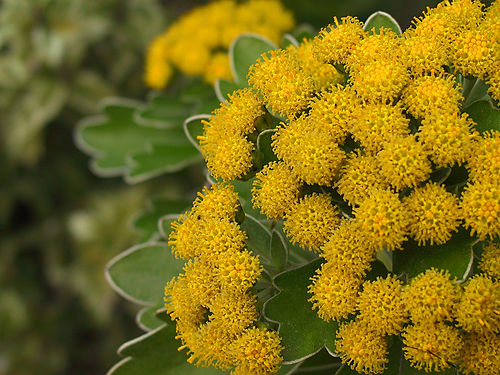 n make a good, dense groundcover for a mostly sunny spot. It’s reported to be hardy in zones 5 to 9.

The one drawback to C. pacificum is that it can be hard to find in commercial nurseries. You’ll find mail order sources listed here. Remember, you don’t have to buy much, because it spreads over time. And always with “passalong plants” like this one, if you see it in a friend’s garden, just ask for a piece.