American beautyberry is an odd sort of shrub. By this I mean it’s hard to categorize. During the spring and summer it’s not really much to look at, just a generic looking bush that’s probably best placed in an informal setting. Not the kind of shrub you lust after…

Yet when it comes to calling attention to itself in the fall, this shrub is shameless! By late summer it’s already heavily adorned with clusters of berries so purple, they’re downright shocking. The berries hold their own through these cool, crisp days of September — but just wait until a bit later in the fall. In October and November, when the shrub has lost its foliage, the fruits are absolutely brazen on the leafless branches.

I was visiting a friend in a suburb of Nashville awhile ago and we were on our way home from brunch when I noticed the color purple on a median strip in the center of the road — lots of lots and purple, for at least a quarter of a mile or so. Even at 45 miles per hour, I figured it had to beautyberry (Callicarpa americana). And I knew I had to stop for pictures, even though traffic was a bit on the heavy side. 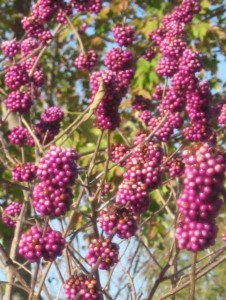 The scene really was amazing, with the sunshine, bright blue sky, autumn foliage, and the myriad of bright purple berries. None of my pictures did justice to the plants at all, perhaps because I was trying to keep the cars and traffic lights out of my shot. But whoever planned this planting really did a good job of clustering the shrubs to make a strong impact.